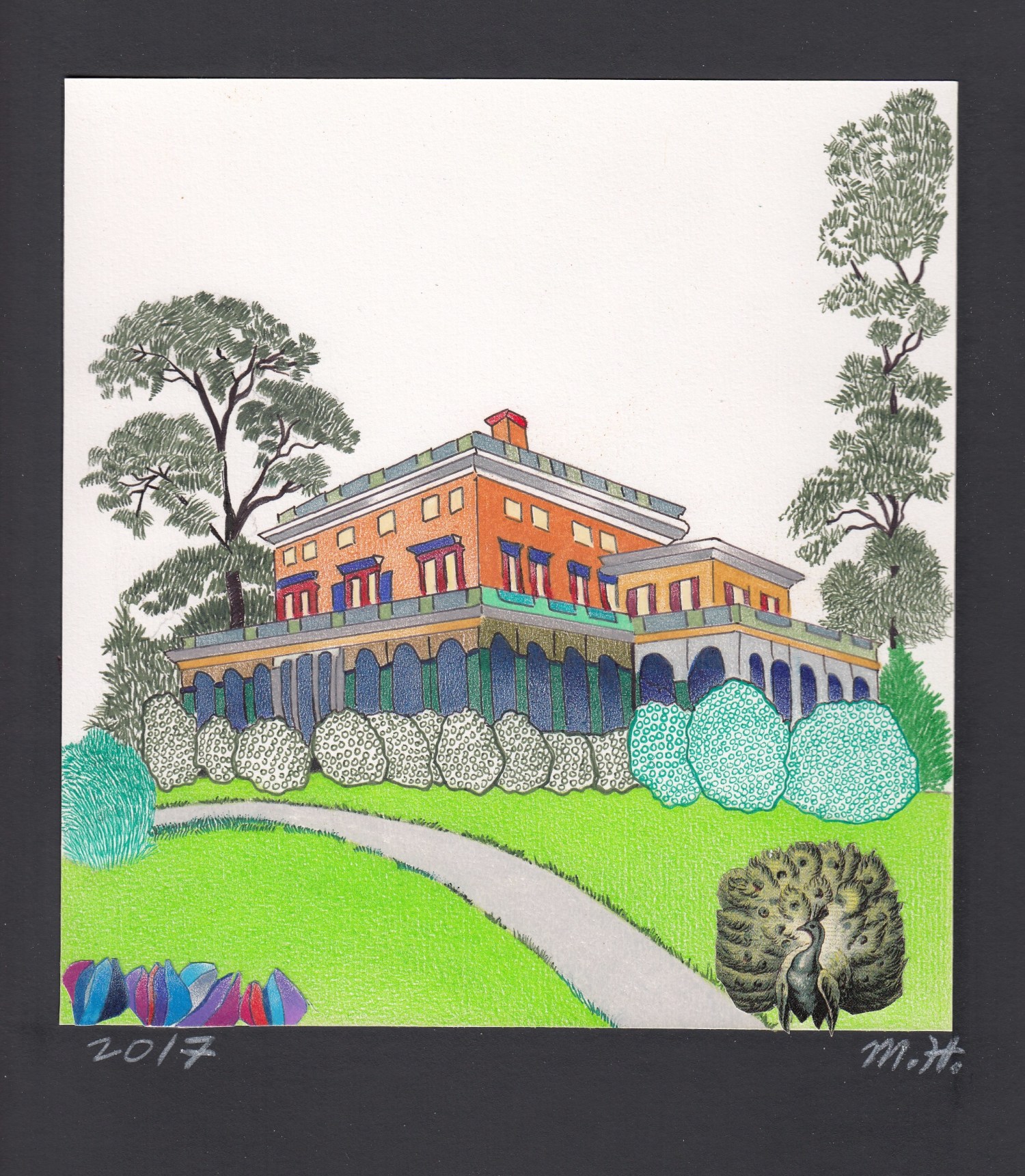 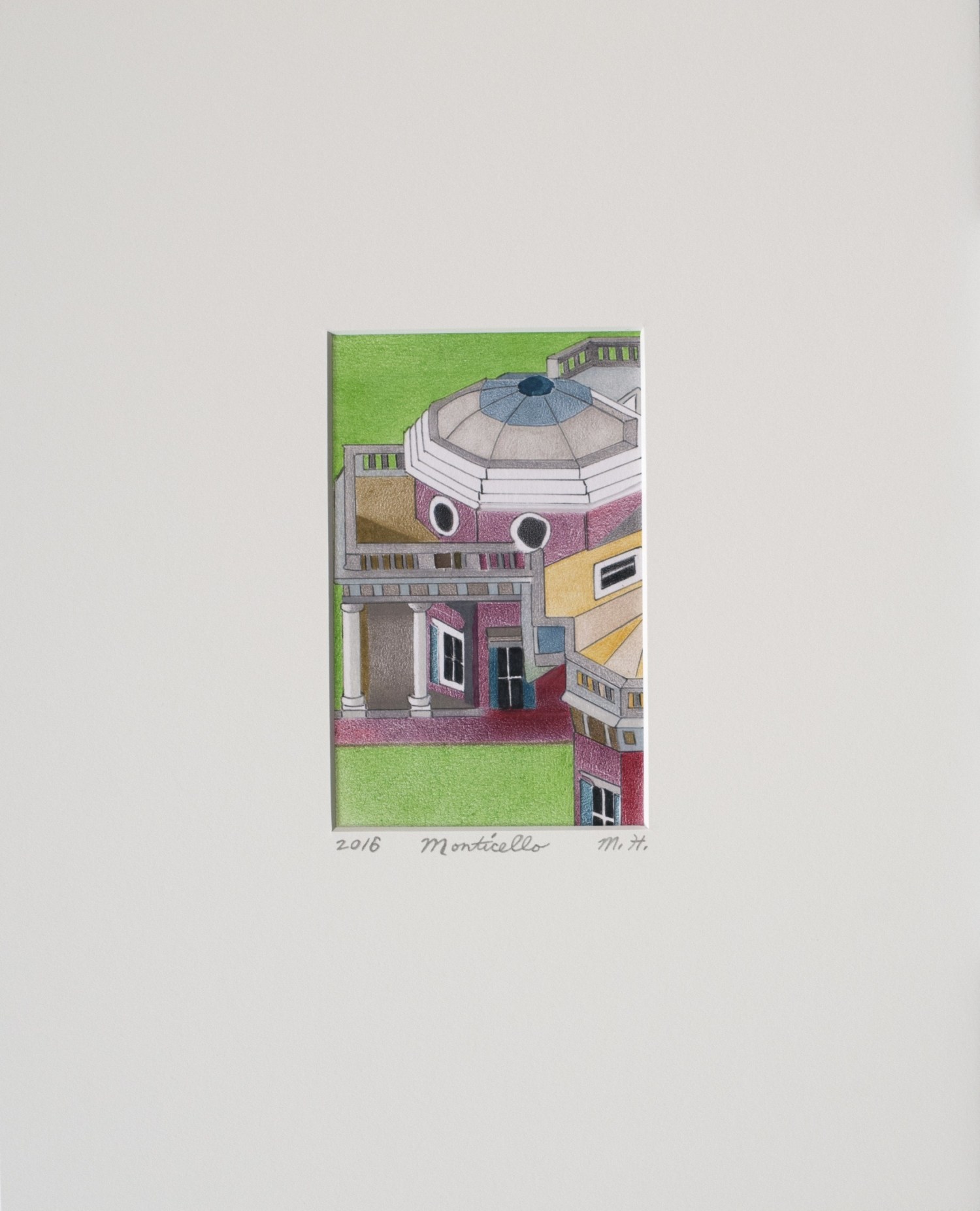 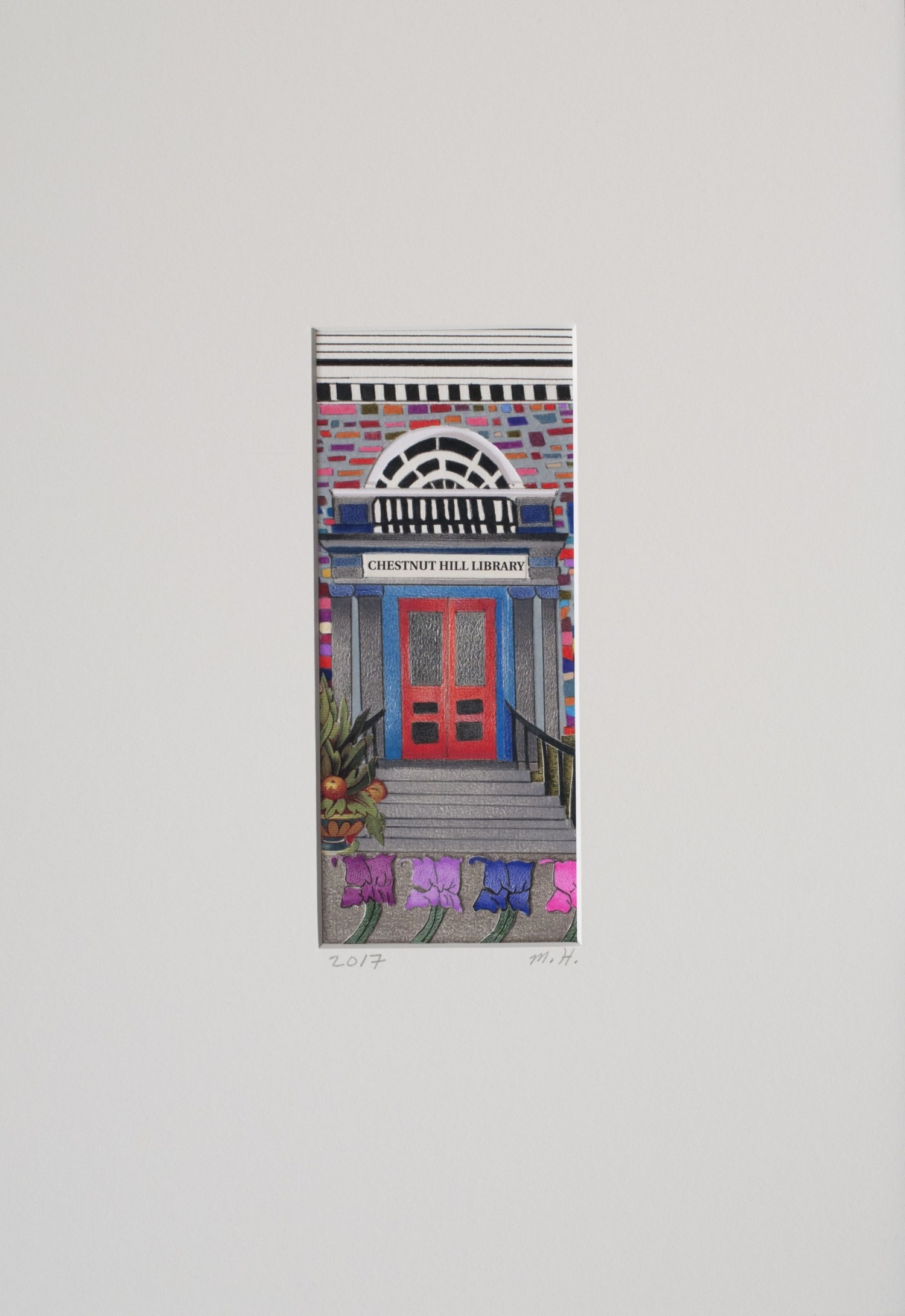 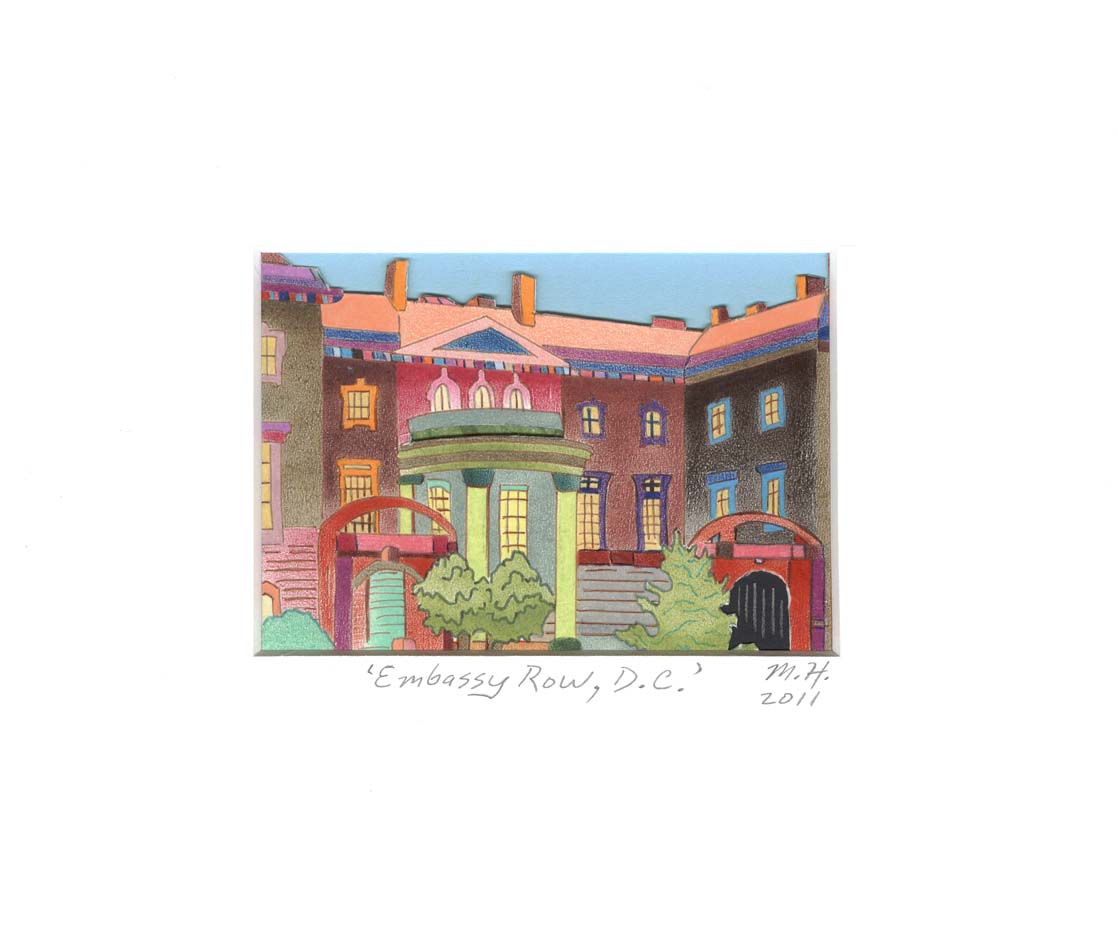 *Considered Washington's premier residential address in the late 19th and early 20th centuries, it is Massachusetts Avenue in the northwest area of The District which became known for its numerous mansions housing the city's social and political elites. The segment between Scott Circle and Sheridan Circle became known as ' Millionaires Row. '  In mostly Beaux-Arts grandeur, residents many years back decided to showcase their fortunes in the Nation's Capital.  They were members of the first ranks of mining, railroads, banking, publishing, politicians, and speculators in the 1880's-90's.  Spendthrift offsping, the Great Depression and other misfortune eventually drained the resources of many families. Only fifty years ago, Embassy Clubs and other institutions were buying up their mansions for as little as ten cents on a dollar.  But in between, the high life and high architecture has made for some great stories.  Alice Roosevelt Longworth delivered a famous line in a home on Embassy Row-  " If you don't have anything nice to say, sit next to me.

*Embassy Row is a photographer's urban paradise with such stately structures just bordering the District of Columbia's enormous Rock Creek Park, and located just slightly southeast of National Cathedral. The wide thorofare extends across Dupont Circle as it stretches beyond Connecticut Avenue traveling towards Union Station. 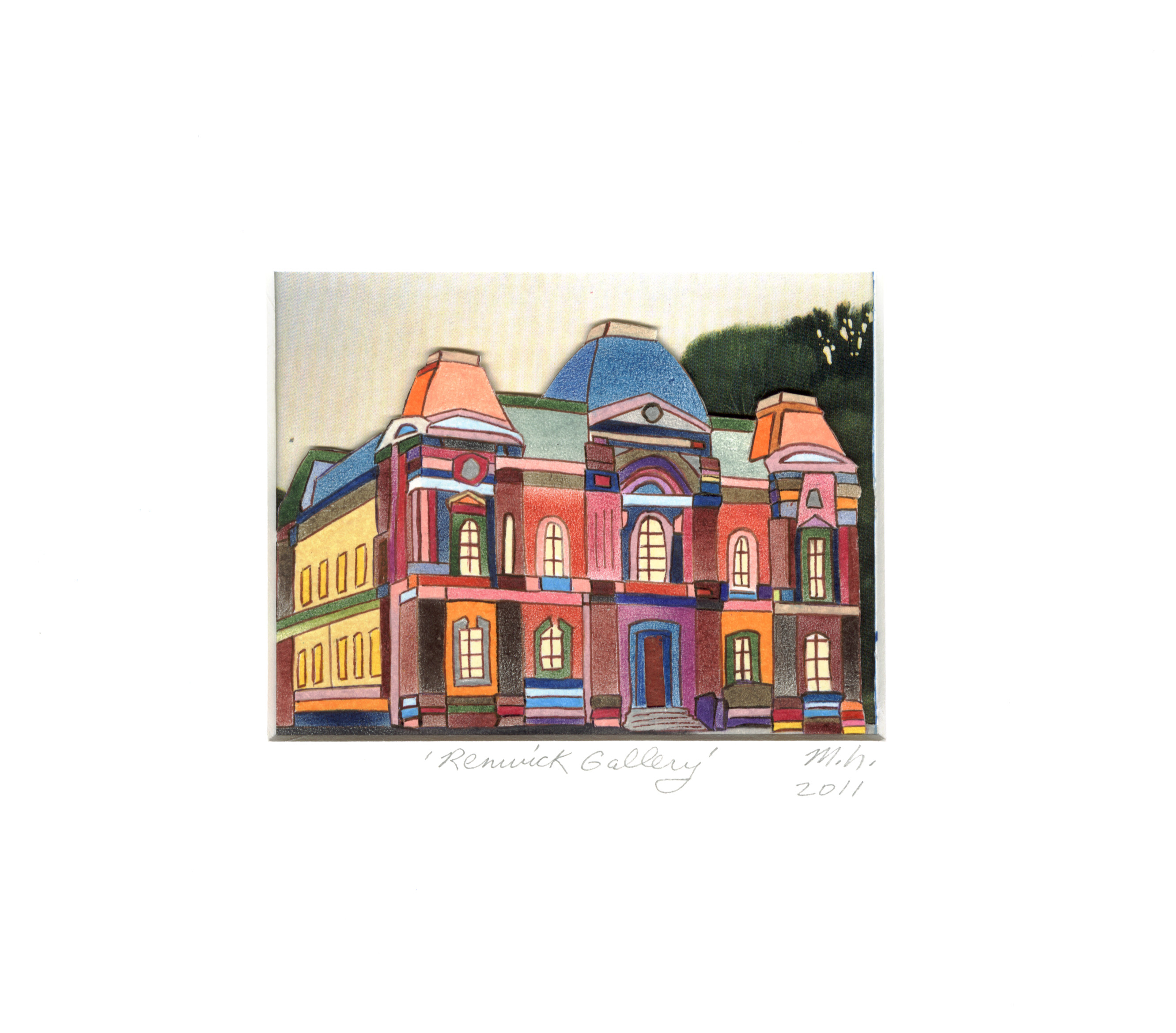 
A Downtown Washington edifice, just steps away from where the President's motorcade pulls into the back of The White House, this Second Empire mansion was designed by architect James Renwick in 1858 to display the private art collection of banker William Wilson Corcoran who later moved his holdings to the Corcoran Museum in DC. The Renwick is a branch of the Smithsonian's American Art Museum which focuses on America crafts and decorative art. Past works have included Louis Comfort Tiffany masterworks, New American furniture, quilts from the antebellum South,  George Ohr pottery and many 20th-21st century craft artisans. The Grand Salon at the top of the large staircase is remarkable which was furnished in 1870s-80s style, and filled with 19th Century paintings and incredible ornate moldings. The Renwick Gallery is adjacent to the Old Executive Office Building on 15th & Pennsylvania Avenue where former Vice Presidents prior to William Jefferson Clinton have held their desks. In terms of this particular drawing and ' Embassy Row ' which I have captured of both structures, I chose somewhat of a non conventional use of colors that the building actually is, with a stylized rendering of it making use of a vibrant palette combination. 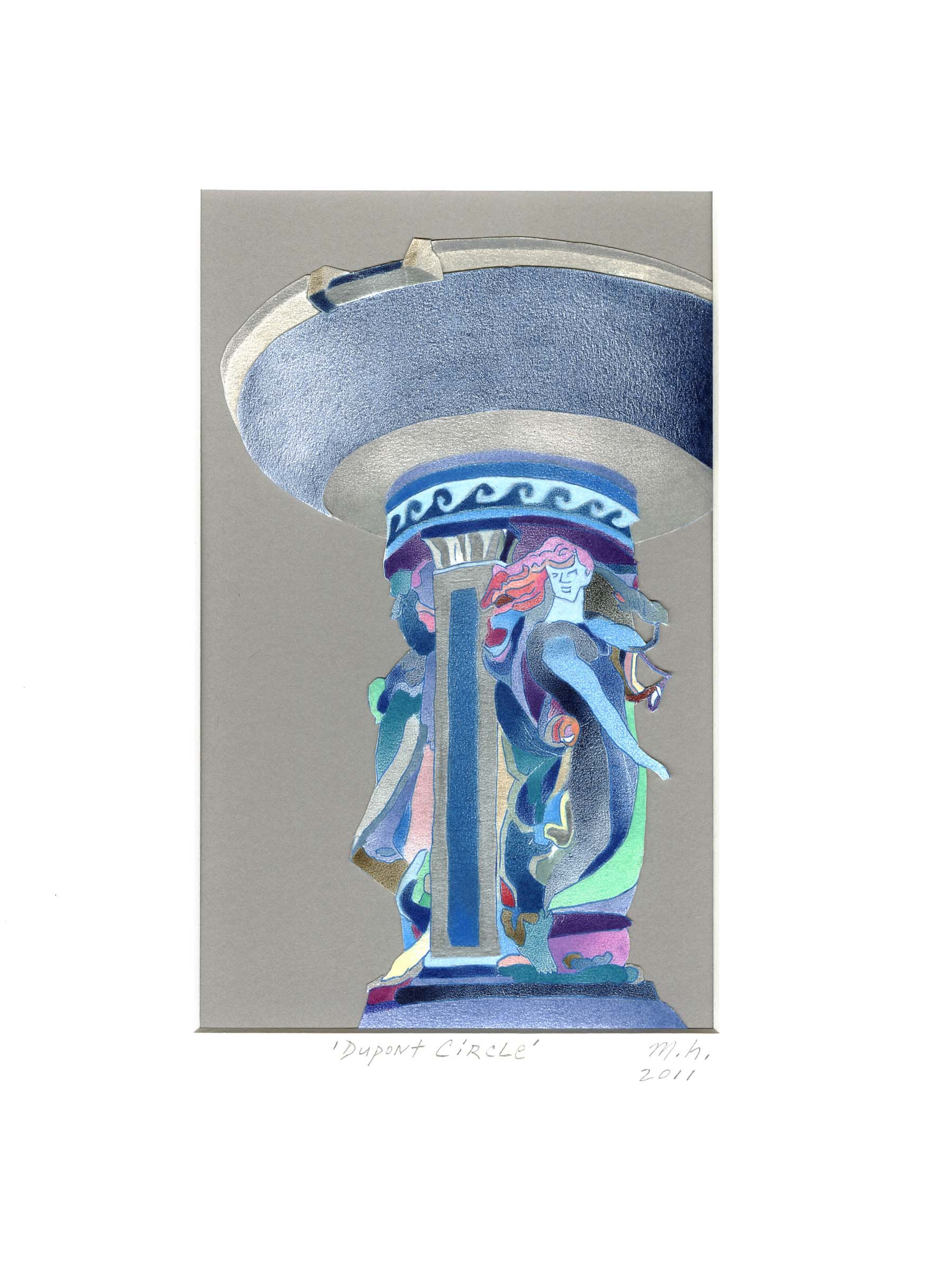 Dupont Circle is located in the "Old City" of Washington in an area planned by architect Pierre Charles L'Enfant, but remained largely undeveloped until after the Civil War when there was a large influx of new residents. The area that now constitutes Dupont Circle was once home to a brickyard and slaughterhouse. There also was a creek, Slash Run, that began near 15th Street NW and Columbia Road NW, ran from 16th Street near Adams Morgan through Kalorama and within a block of Dupont Circle, but the creek has since been enclosed in a sewer line. Improvements made in the 1870s by a board of public works transformed the area into a fashionable residential neighborhood.

In 1871, the U.S. Army Corps. Of Engineers began construction of the traffic circle, then called Pacific Circle, as specified in L'Enfant's plan. On February 25, 1882, Congress renamed it " Dupont Circle", and authorized a memorial statue of Samuel Francis Dupont, in recognition of his service as a rear admiral during the Civil War. Unveiled on December 20, 1884, the statue was sculpted by Launt Thompson, and the circle was landscaped with exotic flowers and ornamental trees. Several prominent duPont family members deemed it too insignificant to honor their ancestor, so they secured permission to move the statue to Rockford Park in Wilmington in 1917, and commissioned Henry Bacon and Daniel Chester French to design the fountain that sits in Dupont Circle today. In 1920, the current double-tiered white marble fountain replaced the statue. Daniel Chester French and Henry Bacon, the co creators of the Lincoln Memorial designed the fountain, which features carvings of three classical figures symbolizing the sea, the stars and the wind on the fountain's shaft. Dupont Circle is about a 20 minute casual walk or short Metrorail ride from The White House. 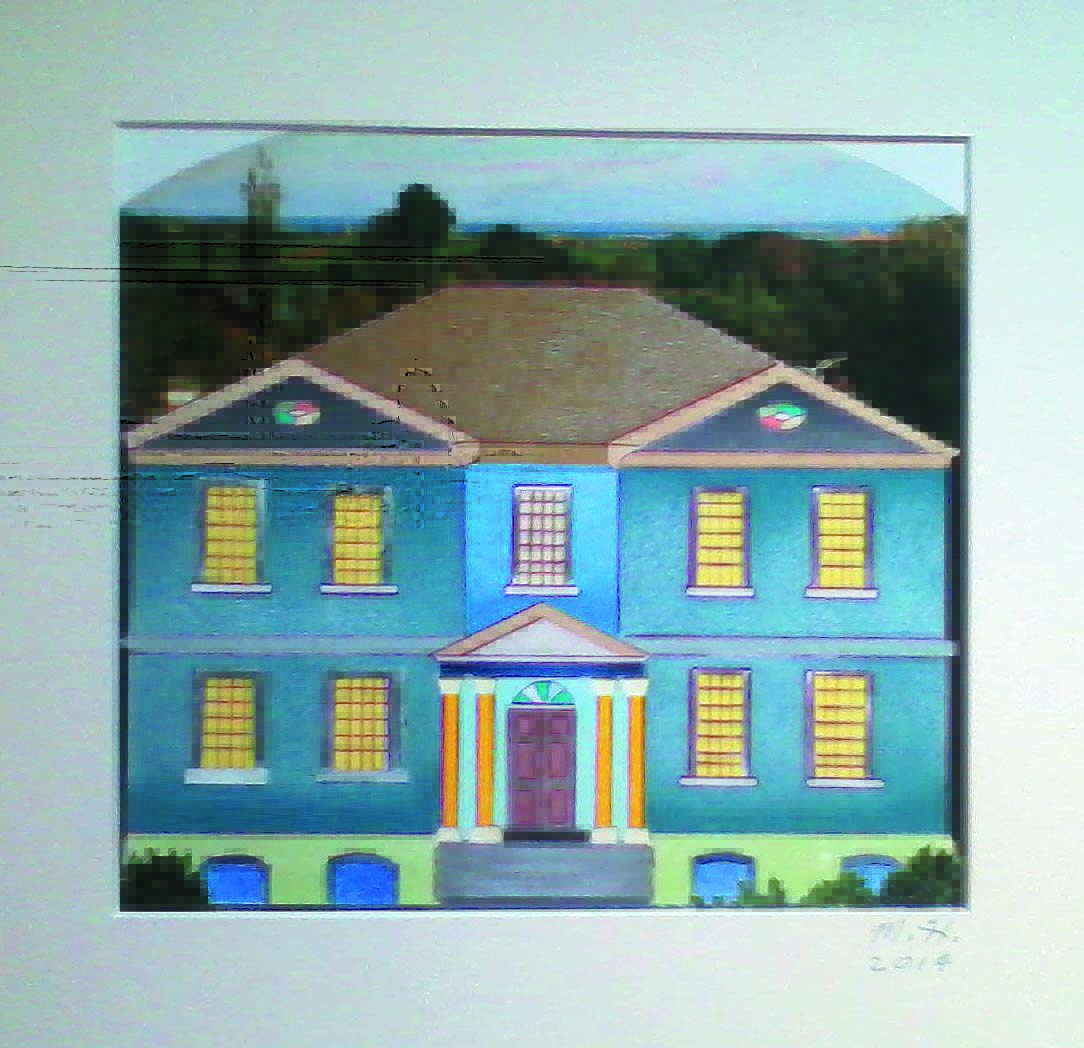 
Neoclassical Revival was based on the Neoclassical architecture of the 18th century France and England.  In America, fashion favored the French Neoclassical, which provided a striking alternative to the ostentatious sculptural ornament associated with the Beaux Arts style. By contrast, the flat-roofed Neoclassical house was subdued and dignified, although equally monumental in scale. Facades were markedly symmetrical, gaining interest from a deliberate play of clear glass against solid expanses of stone, and punctured by rhythmic rows of columns, windows, and French doors. A grand two-story portico often emphasized the centrality of the design. 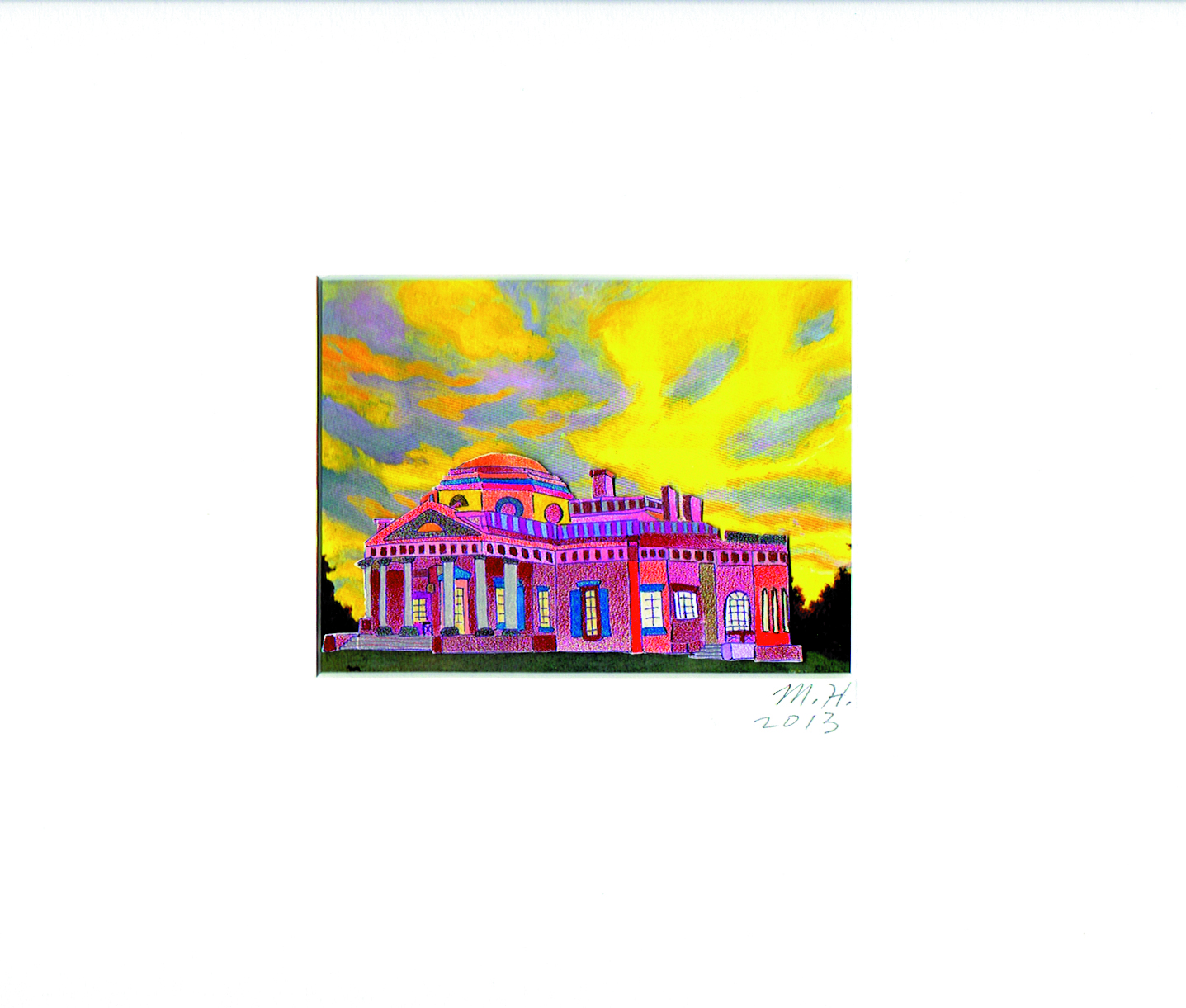 The Home of Thomas Jefferson

In one of my favorite states, that being Virginia, Monticello sits atop a lofty hill in Albemarle County, Virginia, not far from the birthplace of Thomas Jefferson, its creator and most prominent resident, who spent more than four decades designing, dismantling and reimagining the estate he called his “essay in architecture.” A UNESCO World Heritage Site since 1987, the property is considered a national treasure not only for its beauty and historical significance but also for what it reveals about the third U.S. president, a complex and controversial figure whose political philosophy fundamentally shaped the nation. As Franklin D. Roosevelt once wrote, “More than any historic home in America, Monticello speaks to me as an expression of the personality of its builder.”

Born on April 13, 1743, Thomas Jefferson grew up at Shadwell, one of the largest tobacco plantations in Virginia. At the age of 21, he inherited several thousand acres of land that encompassed the family estate as well as his favorite boyhood haunt: a nearby hilltop called Monticello (Italian for “little mountain”) where he resolved to build his own home. In 1768, a year after the future president was admitted to the Virginia bar, workers broke ground on the site, beginning a decades-long process that would captivate Jefferson, bankrupt his family and produce one of America’s most iconic and historically significant architectural masterpieces.

"I am as happy no where else and in no other society,” Thomas Jefferson once wrote, “and all my wishes end, where I hope my days will end, at Monticello.”

In those days, it was common for landowners to choose a stock design for their home from an English architectural handbook; a contractor would then oversee the project from start to finish. But this particular landowner was Thomas Jefferson, the quintessential polymath, whose passions ranged from political philosophy, archaeology and linguistics to music, botany, bird watching and pasta making. (At a dinner honoring 49 American Nobel Prize winners, John Fitzgerald Kennedy stated, “I think that this is the most extraordinary collection of talent, of human knowledge, that has ever been gathered together at the White House, with the possible exception of when Thomas Jefferson dined alone.”) Remembered for drafting the Declaration of Independence, Jefferson also drafted the blueprints for Monticello’s neoclassical mansion, outbuildings, gardens and grounds. Though he had no formal Italian Renaissance training, he had read extensively about architecture, particularly that of ancient Rome and the . Years later, he would become an accomplished architect whose designs included the Virginia state capitol and the main buildings at the University of Virginia.

Monticello was unique not only in its design but also in its use of local resources. At a time when most brick was still imported from England, Jefferson chose to mold and bake his own bricks with clay found on the property. Monticello’s grounds provided most of the lumber, stone and limestone, and even the nails used to construct the buildings were manufactured on site. 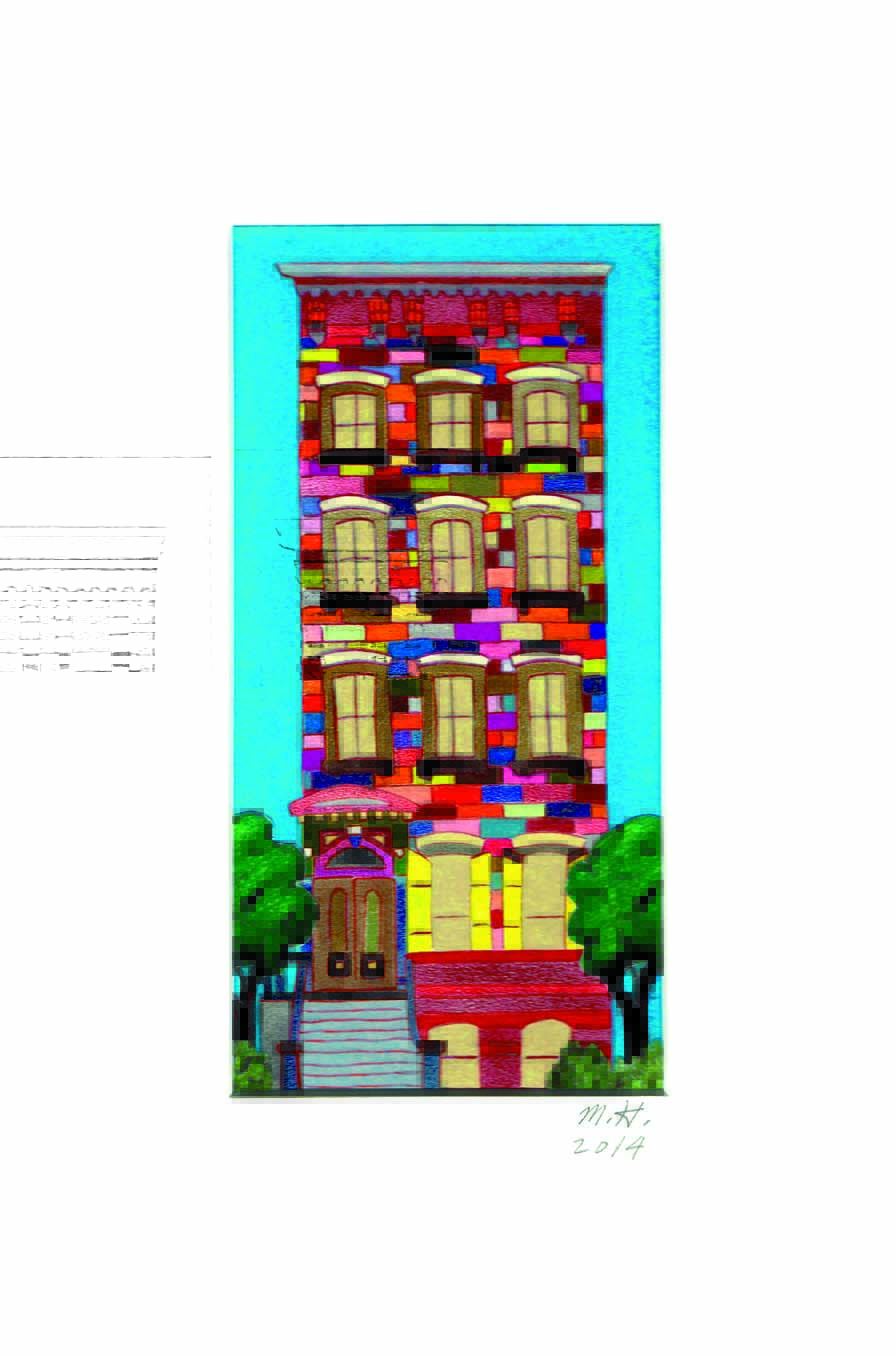 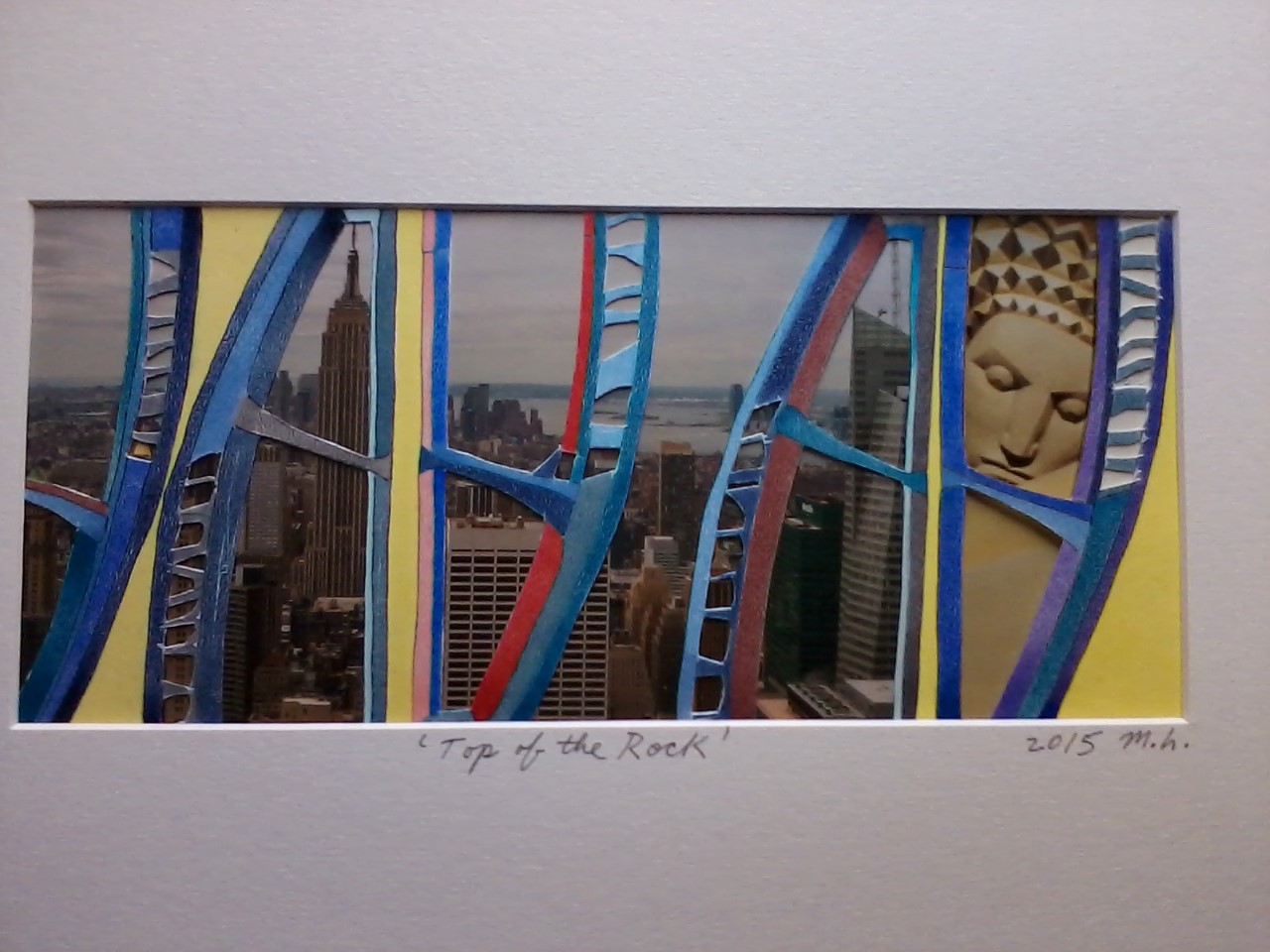 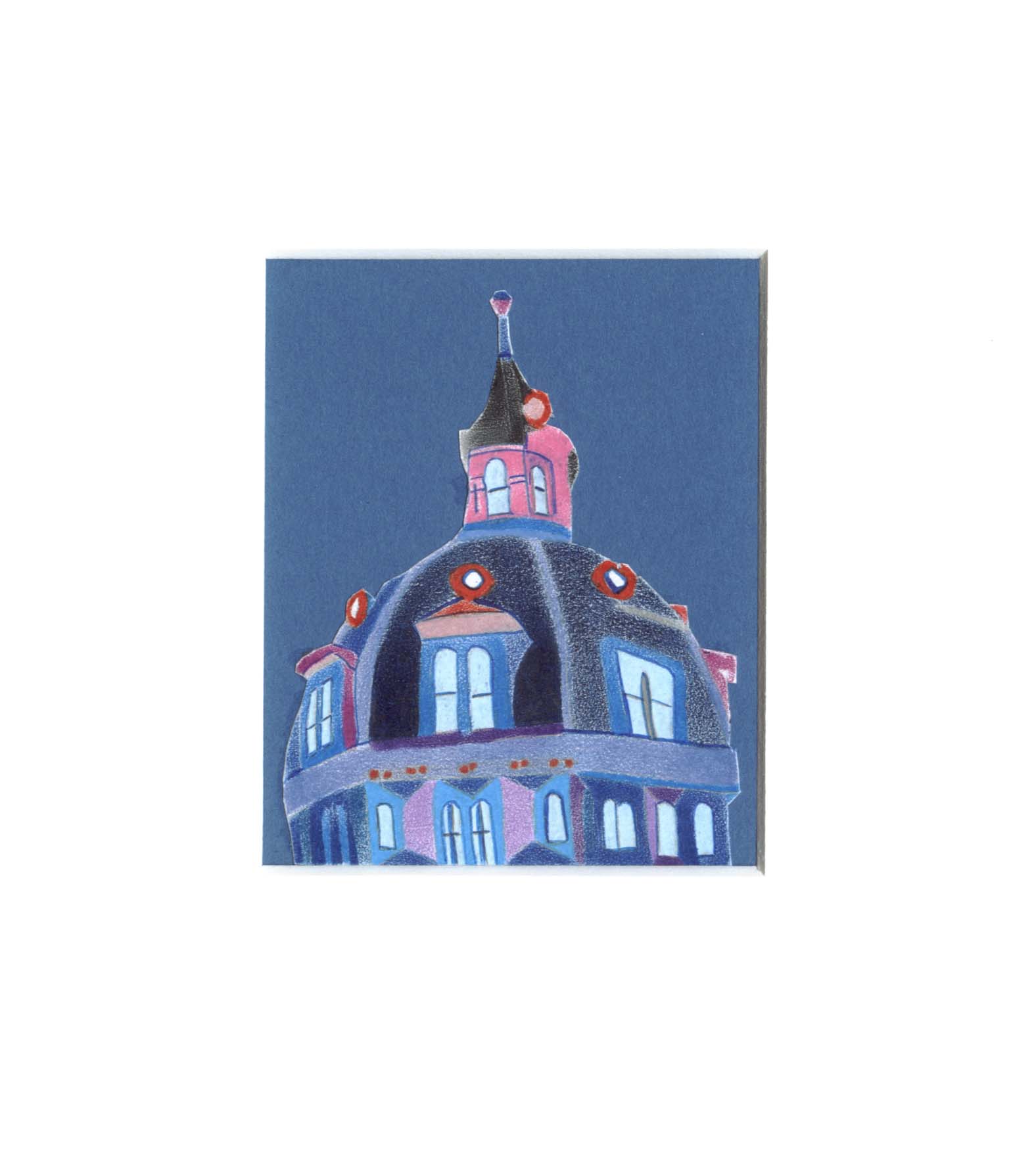 Colored Pencil on Board ( SOLD )

"  The shapes arise! " exclaimed the poet Walt Whitman, writing in the 1860's.  Shapes of factories, arsenals, foundries, markets,  shapes of the two-threaded tracks of railroads, shapes of the sleepers of bridges, vast frameworks, girders, and arches.  Whitman, who lived from 1819-1892, was experiencing the shapes of the emerging industrial society, the ' vast frameworks, girders, and arches ' of a world being born.  Forged by engineers, inventors, and entrepreneurs, not artists or architects, these were the vast new shapes of science and commerce. Although the primary intention of these form givers was to solve practical problems of transportation, production, and shelter, not to create art, they often succeeded in producing solutions of beauty as well as practical purpose. 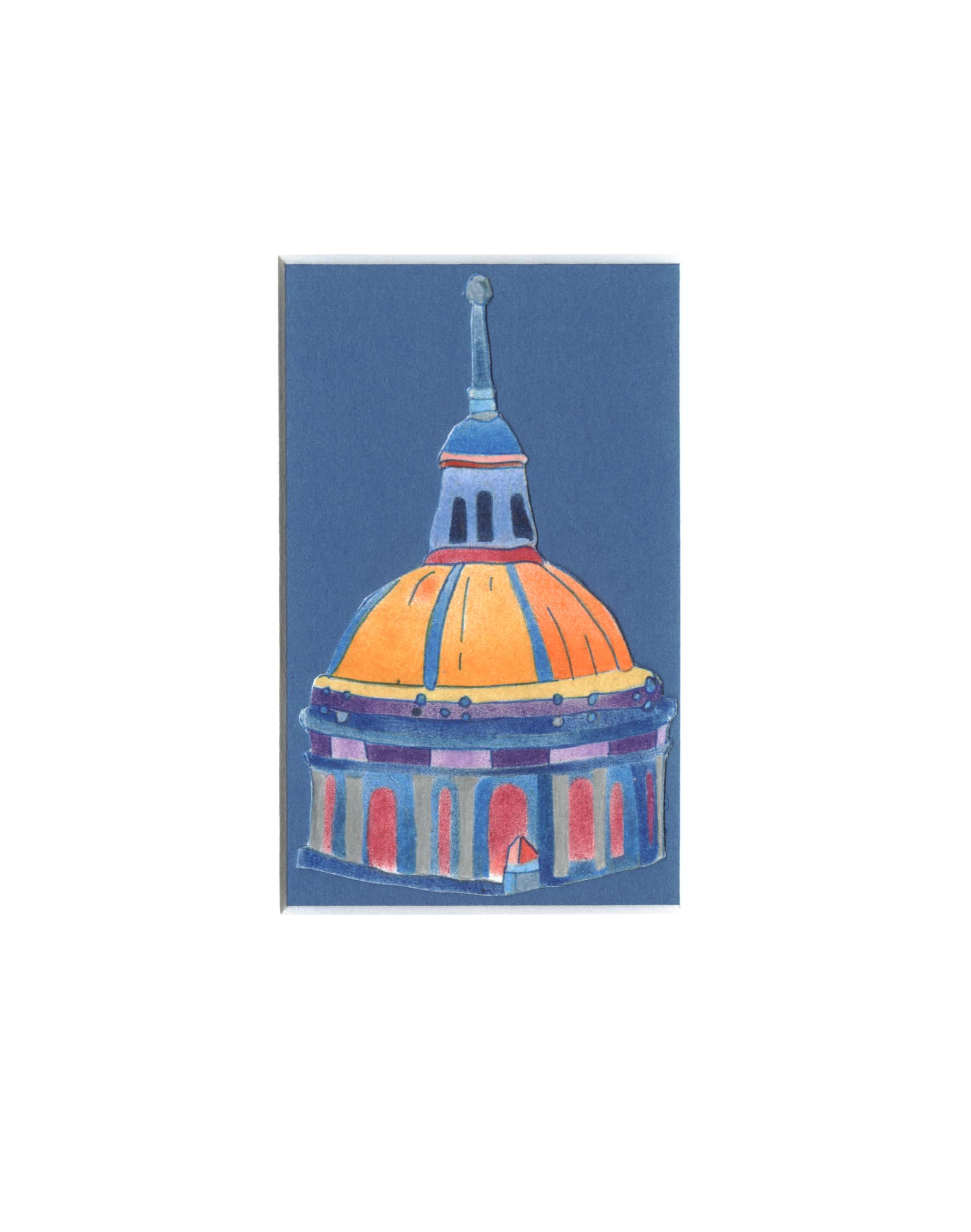 The great engineering achievements of the nineteenth century- bridges, exposition halls, railway stations..would turn out to be the harbingers of the ' modern functionalist  architecture ' and product design of the twentieth century Years ahead of their time, the formal qualities of these supposedly styeless giants would gradually enter the consciousness of the world's people. The public would become aware that a unique new style was arising. Giving visual form to the vlues, materials, and processes of the Industrial Revolution, the new functionalist or machine style would, within the twentieth century, come to dominate all areas of design, from engineering to architecture to everyday products. I myself as an artist pay homage to the remarkable artisans and developers of these things within our world which has given me impetus for my art and representation of these awe inspiring structures, in a stylized way if you will with my particular handling of color and form. 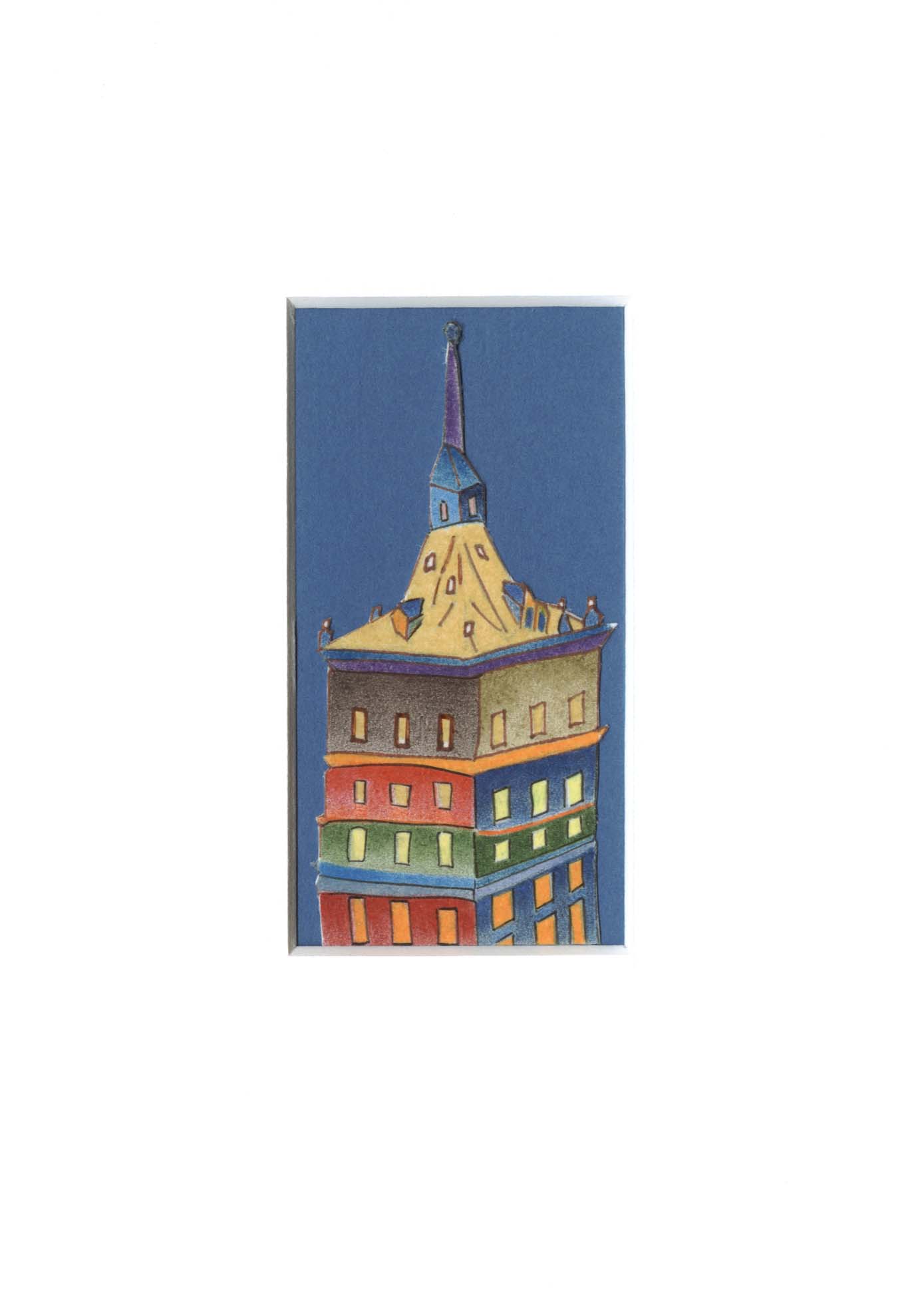 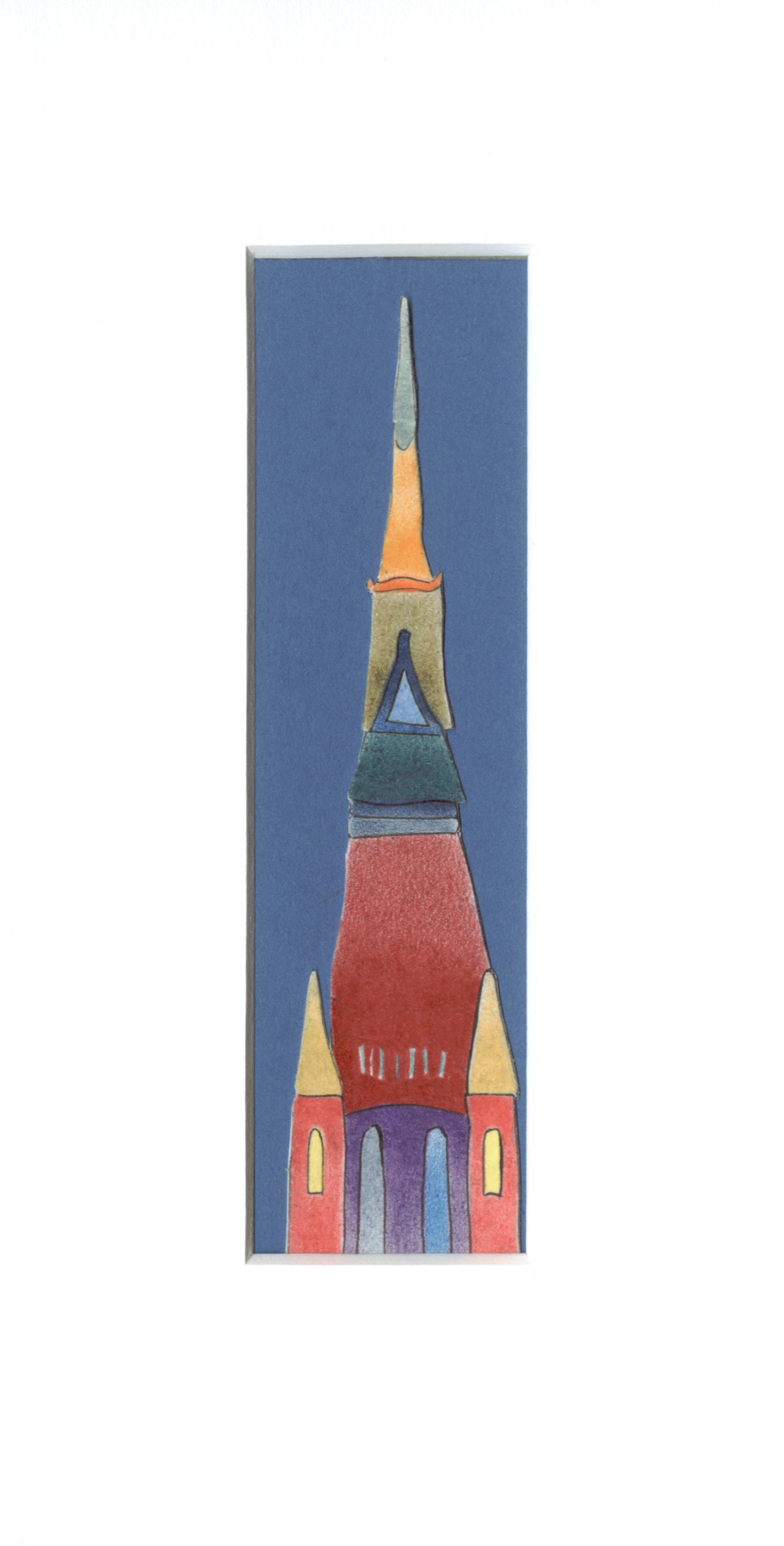 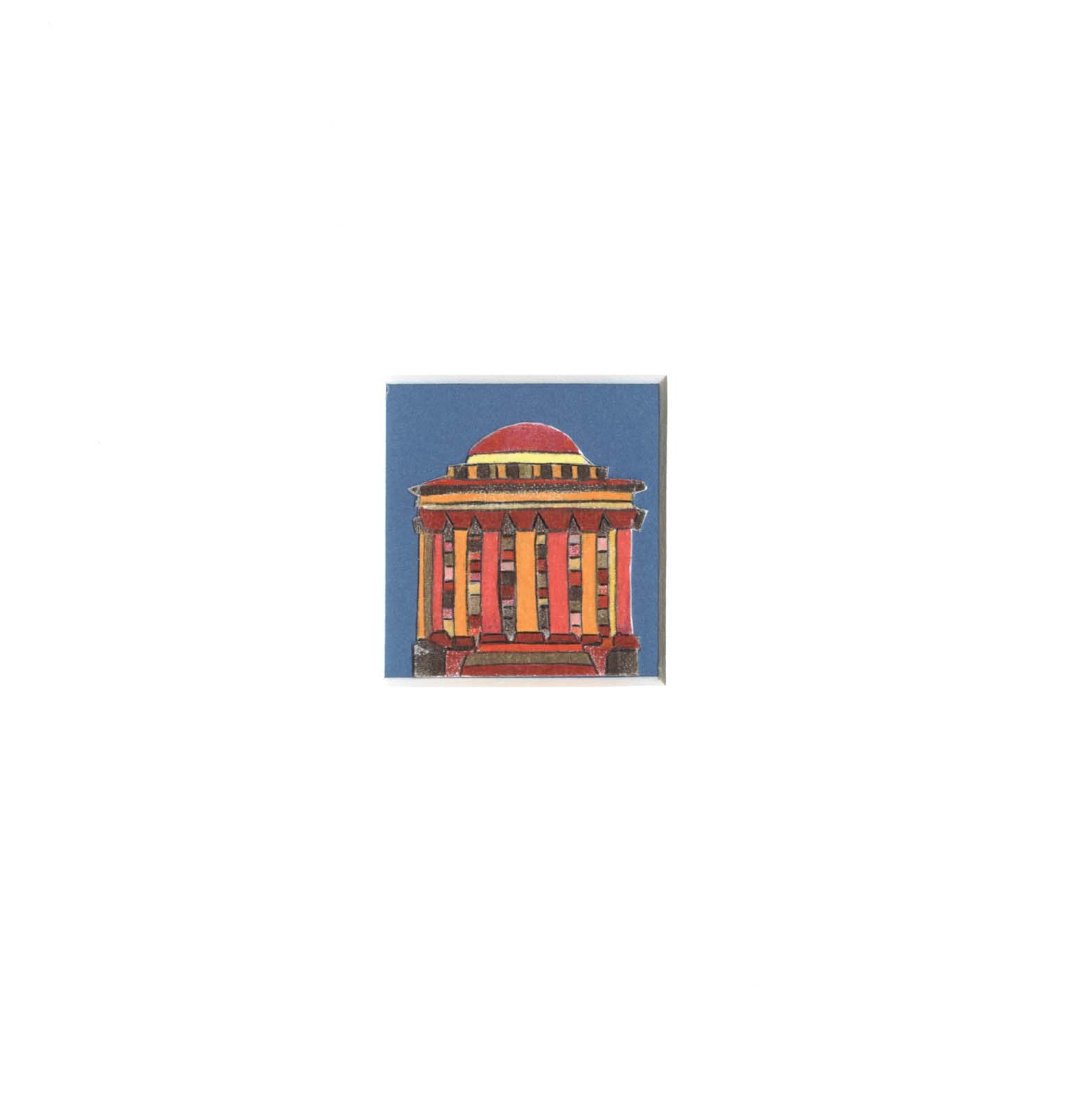 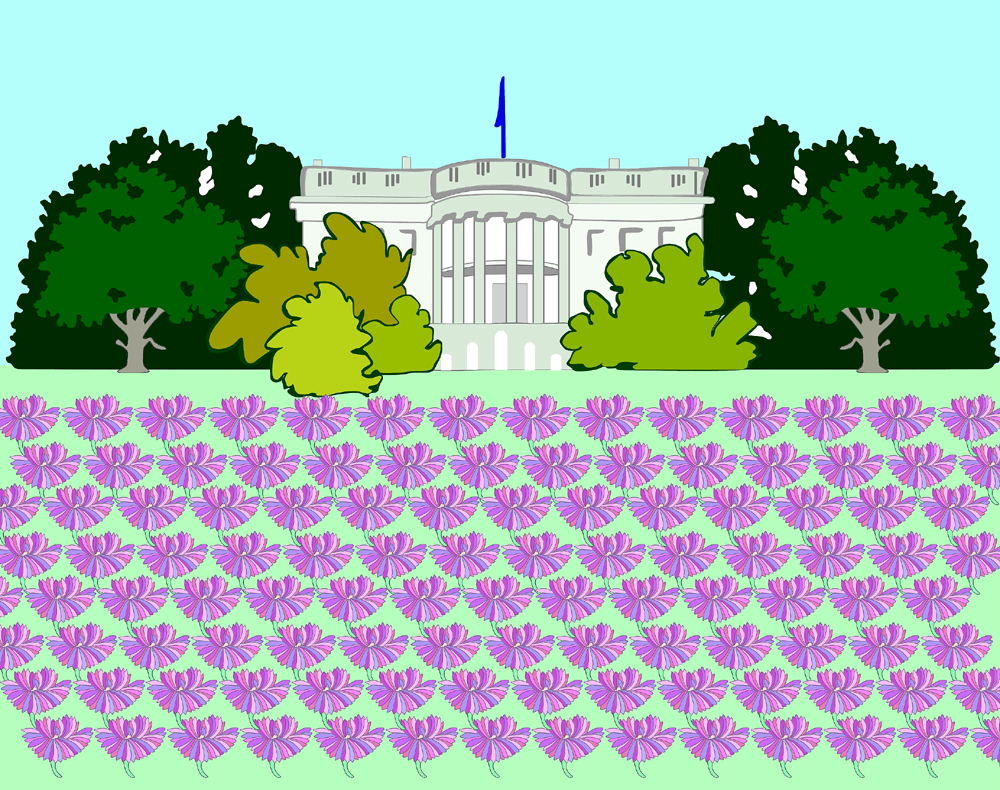 ' South Lawn of the White House '