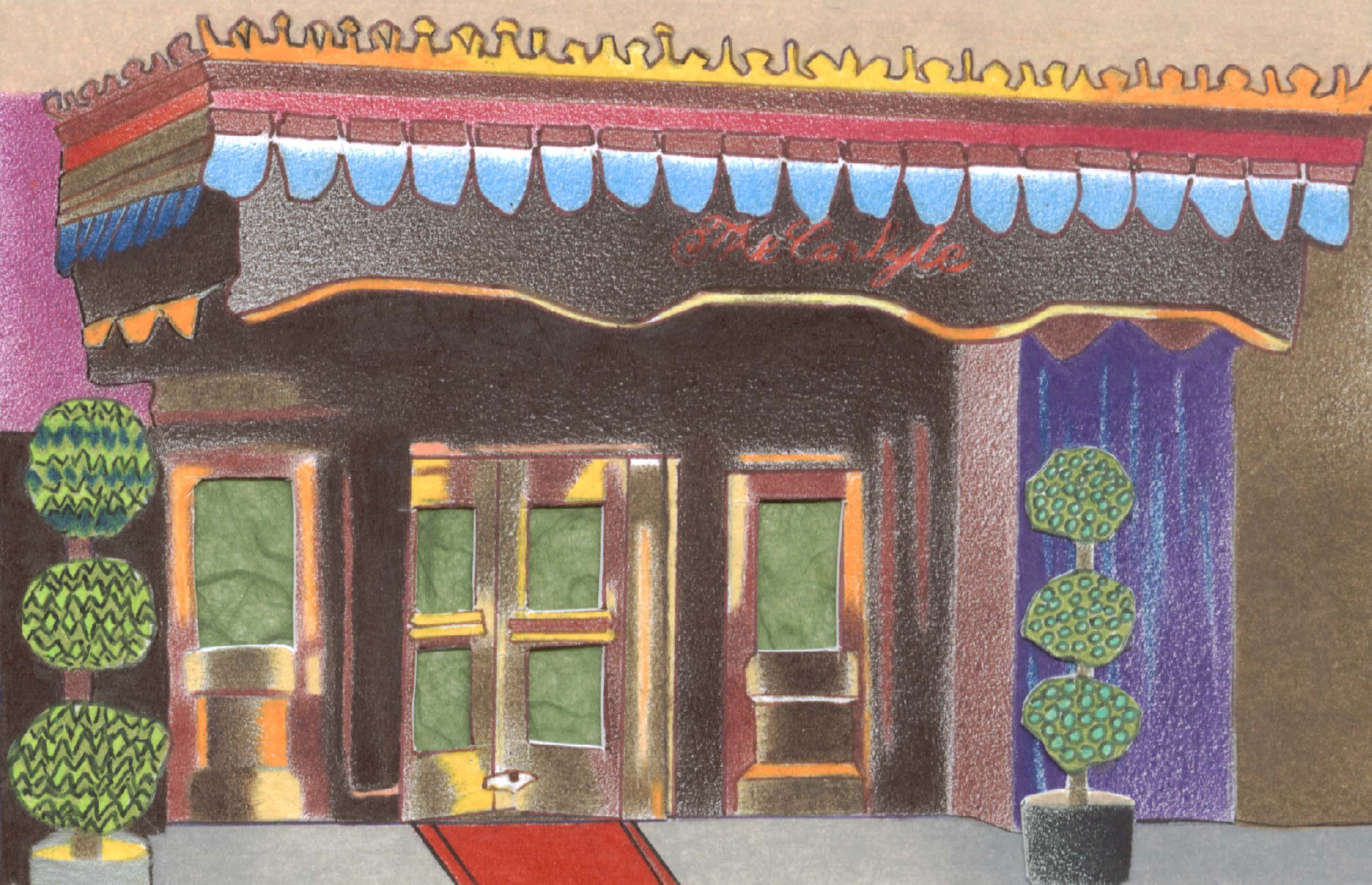 Front entrance of Hotel Carlyle on Manhattan's Upper East Side

Architecture and the elements and forms that went into the development of some of New York City's grandeur buildings are of monumental interest to me. I have spent years visiting New York to take it all in, from structures that pre date the 20th Century to today's modern glass and steel edifices. I am immensely intrigued by pre and post WW2 buildings that were erected, particularly north of 59th Street on both sides of Central Park and extending up to bordering Harlem. This gem of a hotel and skyscraper is extraordinary, especially at night when the flood lamps illuminate the tower. One early evening in October a few years back, I viewed it from many blocks distant from it, way down on 49th & Madison Avenue in Midtown which gave me the impetus to capture it on paper. Hotel exteriors and interiors in large cities have been of much interest to me for many years.

*New York  is one city that offers me these amazing sources of inspiration for continuous ideas with future design pieces.

The Empire State Building rendered after dark.  Her majesty was  completed in 1931 and currently standing immense and proud over Midtown Manhattan at 34th & Fifth Avenue. What I find extraordinary about the erected masterpiece aside from it being the architectural symbol of New York , are its changing floodlights illuminating the tower, whether it be navy blue & white after the Yankees won the World Series, to evergreen & red on Christmas Eve, to emerald green on St. Patrick's Night,  Patriotic on July 4th, to pastel yellow & purple during Easter Weekend. Viewing it up close a few blocks away or at distance from Little Italy, Murray Hill, or Long Island City-Queens.. it was a must for me to capture on paper.

The once-upon-a-time World's Tallest Building (after the two Petronas Towers in Malaysia, Sears Tower in Chicago, and the former WTC , (it now ranks sixth), famous in fact and fiction, icon in New York City, and the first place from which to study the city. It has an impressive collection of statistics : 1,250 feet to the top with 102 floors ; 1,860 steps ; 73 elevators ; 60 miles of water pipes ; five acres of windows ; 365,000 tons of material-- and it was under construction for only 19 months.  Built by Shreve, Lamb & Harmon in 1931, during the Depression, it was known for many years as " The Empty State Building", and the owners relied on income from the observation deck to pay their taxes. On a good day you can see for 50 miles. The architects must be lauded for the way in which they handled the immense and potentially oppressive bulk of this building. The tower is balanced, set back from the street on a five-story ( street scale ) base.  The subtly modulated shaft rises at a distance, terminating in a conservatively geometric crown. The limestone and granite cladding, with its steel mullions and flush windows, is restrained, with just a touch of an Art Deco air ( compared to the exuberant ornamentalism of the Chrysler Building.  The ESB has a lively history. Between 1857 and 1893 it was the address of a pair of mansions belonging to members of the Astor family and the center of New York social life. In the early 1890's a feud erupted, and William Waldorf Astor, who had the house on West 33rd Street, moved to Europe and replaced the house with a hotel- The original Waldorf which then moved to the current Park Avenue at 50th Street. His aunt across the garden, Mrs. William Astor, moved within the year, and had a connecting hotel- The Astoria, completed in 1897.  As one of the world's tallest buildings that made   King Kong famous in the Gotham City, along with numerous other Hollywood films, the view up top overlooking the NY    tri-state area is not to be missed.

An Art Deco Architectural Gem at East 42nd Street & Lexington Avenue in Midtown Manhattan and on my top ten list of favorite New York buildings which is amazingly stunning in sunlight by day, and even more impressive  lit up by night. My suggestions on best areas of the city to view it?  Start by taking a stroll on a Fall evening walking east from the NY Public Library, or  enjoy its lights late night driving over the Queensboro Bridge coming into town.  More enjoyment of it that I've taken in has been during early morning hours prior to the NY office workforce hitting the pavement, or under the stars may be your thing  from Lower Manhattan in Soho or around Second Avenue & Houston Street.  Even entering the Big Apple from New Jersey as you circle down the viaduct leading to the Lincoln Tunnel, along with a clear mid spring afternoon where I've seen it from high atop the upper deck at Yankee Stadium in the Bronx.


Built by William Van Alen in 1929 for the Chrysler Automobile Company, this tower which many consider the ne plus ultra of skyscrapers, is an Art Deco Monument.  The building has many car oriented decorative elements :  abstract friezes depicting automobiles, flared gargoyles at the fourth setback resembling 1929 radiator hood ornaments, and the soaring spire modeled after a radiator grille.  The lobby, decorated with African marble and once used as a car showroom, is another Deco treasure.  The lighting of the spire at night- with specialty fitted lamps inside the triangular windows was an idea of Van Alen's that rediscovered and first implemented in 1981.  The edifice was briefly the tallest building in the world until surpassed by the Empire State Building. 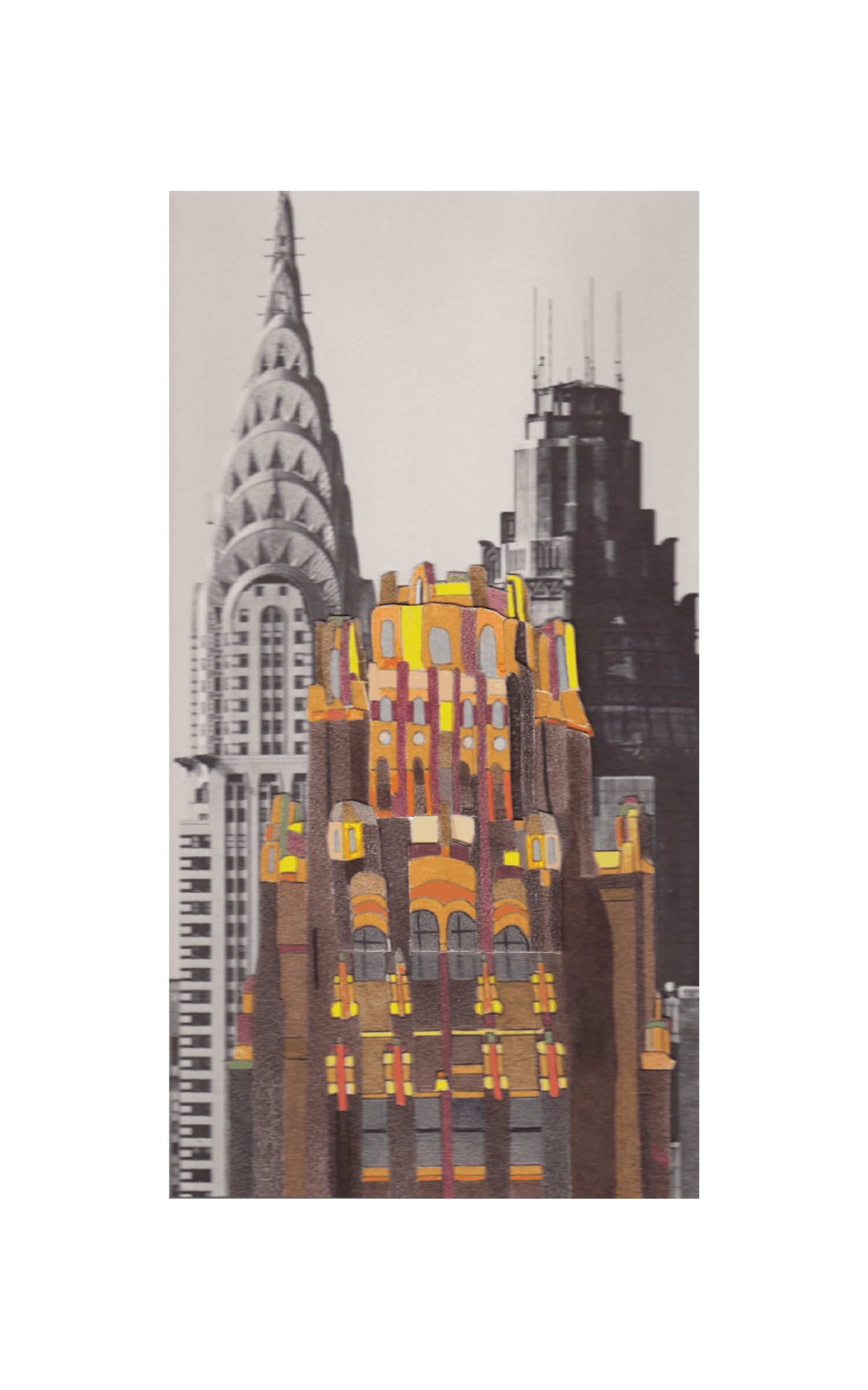 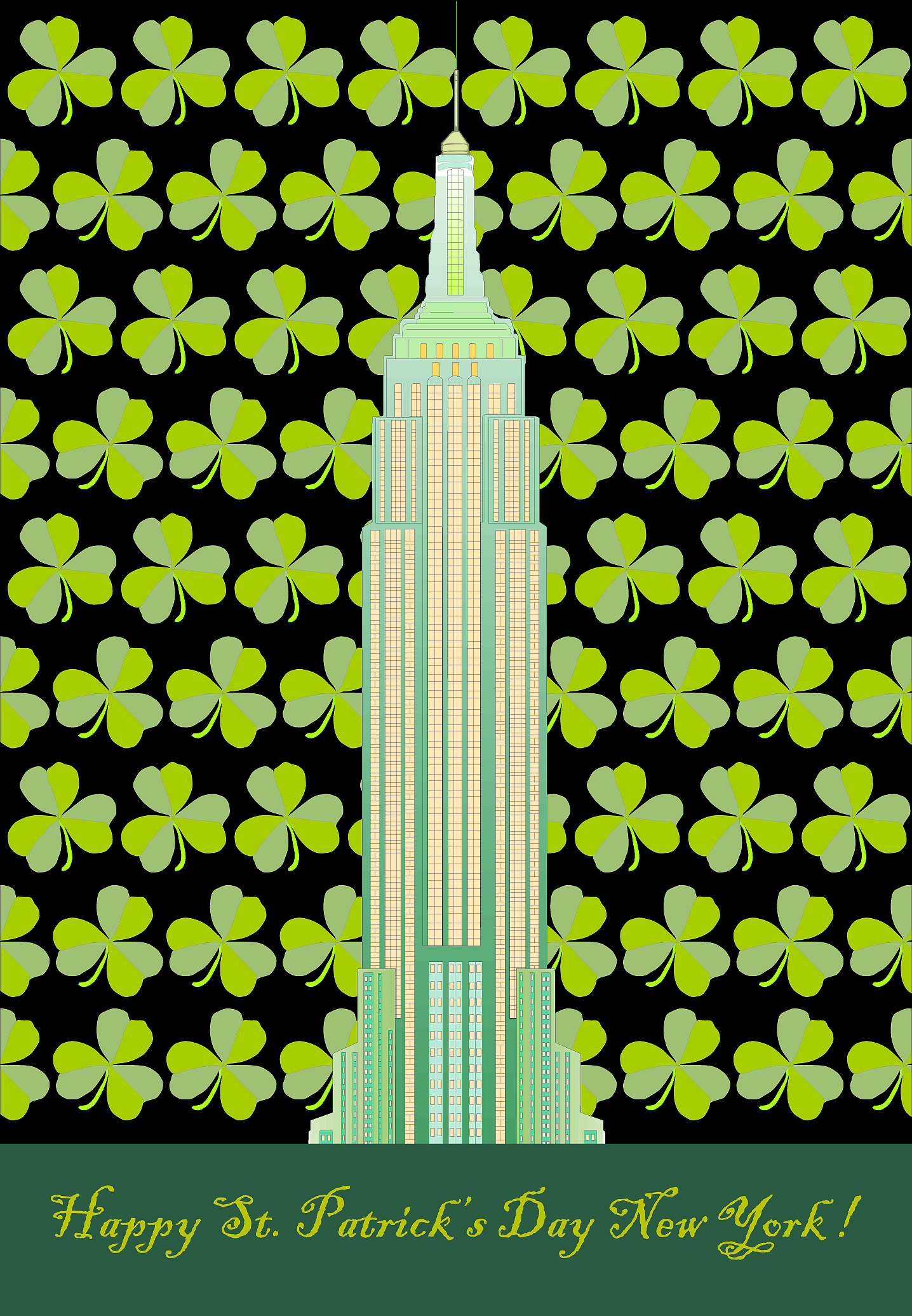 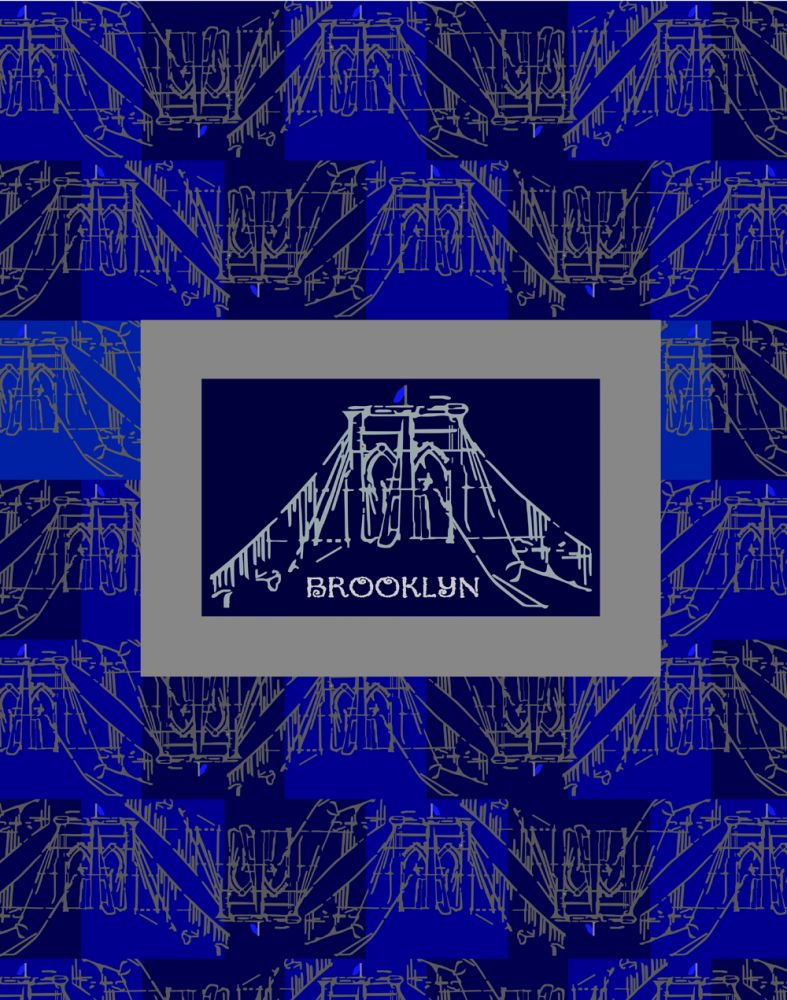